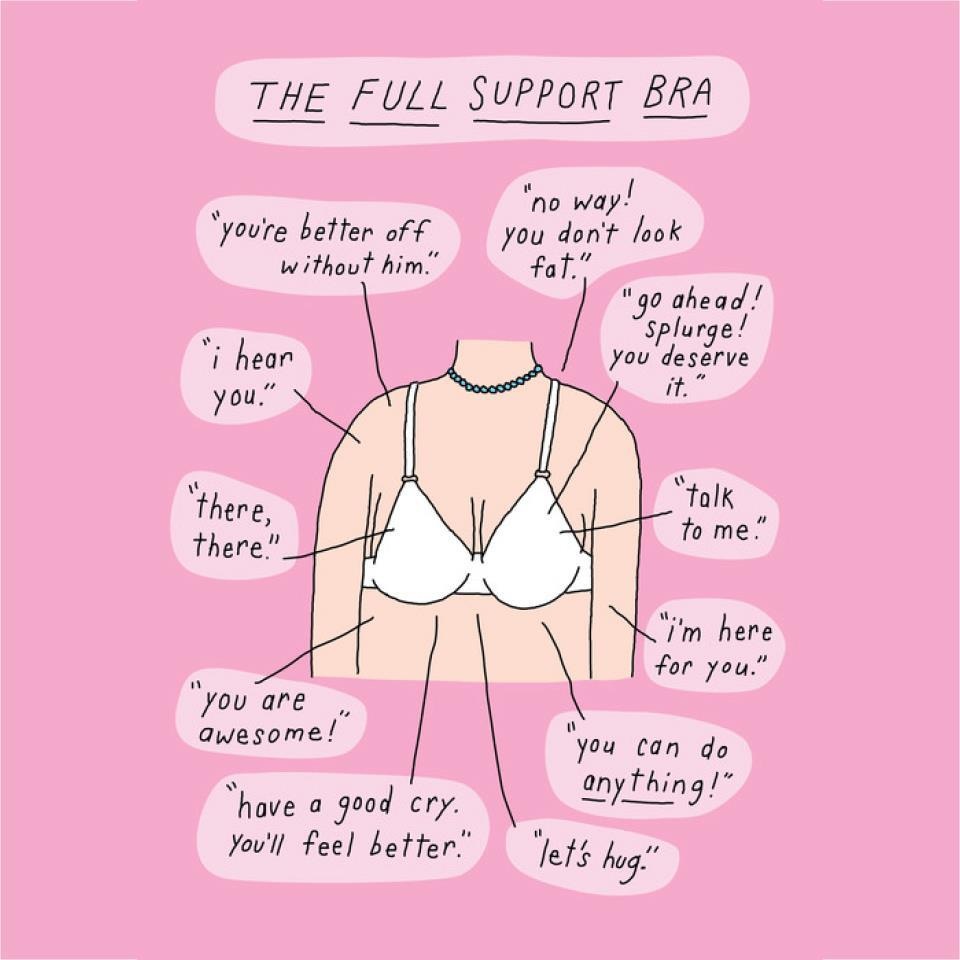 Posted by Unknown at 9:09 AM No comments:

Email ThisBlogThis!Share to TwitterShare to FacebookShare to Pinterest
Labels: The year of paying attention to our breasts.

Bra sizes get an update, but will they fit any better?

The Jockey Fit Kit is a two step process that can be done at home to help you find your best bra fit. The bra has been around for over a century and we still can't find one that fits. It's been estimated that as many as 85 percent of women in the U.S. wear the wrong size for their frame. If you've ever found your bra strap hanging down by your elbow, you're familiar with this fact. It's not only slightly embarrassing in a high-powered meeting, a poorly-fitted bra can cause sagging, neck and back pain. You'd think by now we'd have a better solution, aside from paying a custom fitter upwards of $400 to fix the problem.

"The entire bra purchase process is flawed," Dustin Cohn, Chief Marketing Officer for Jockey International tells Yahoo Shine. "Women are asked to measure their breasts with a tape measure. A woman's breasts are three dimensional, so it doesn't make sense to measure them with a two dimensional method. This changes the way bras support a bigger, bustier woman."

Jockey, the brand once known best for making men's sporty underwear, is strategizing a new way to mass market bras with more customized fits. But first they need women to let go of everything they know about the bra alphabet (A,B,C and so on.)
The company's self-created measurement system, called the Fit Kit ($20), offers 55 sizes using a combination of the 10 cup sizes and multiple band sizes. Measurements are based off of the shape of women's breasts (i.e. volume) rather than actual bust size.

It all sounds promising. "But is anyone ready for measurements like 1-30, 7-36 and 9-42?" asks the New York Times' Stephanie Clifford. The volumetric sizes number 1 through 10 in cup size from small to large, and then combines with band size. So instead of being a 32-B, someone might find they're a 2-32.

The kits are a do-it-yourself compliment of customization. Each comes with color-coded measuring tape, cups, protective lingerie wash bag and video instructions for taking measurements. The bras, which start at $60 and come in five styles, are sold separately.

"It's the closest thing to a custom bra that you'll find," says Cohn.
Still, it might take some adjusting. "I wish their sizing system was more translatable to the standard system," writes blogger Charla Welch, of Bra Crusader, in her review of the kit.


But Jockey isn't the only game in town revamping the fitting process. True&Co, an online retailer, combines mathematical principles with a questionnaire to measure customers for size. “We have an algorithm that defines 2,000 body types,” True&Co's Michelle Lam told the New York Times back in February.
If you're not ready to part with the traditional ABC's of bras, consider a few tips from the pros for finding the right fit.

First take your measurements. There are plenty of simple step-by-step instructions online (like this one) that take the confusion out of the numbers game.

Prepare to road-test. Don't rely on what the tag says because all bras fit differently. The bra should lie flat against your breastbone, the nipple should be at the center of each cup, the cups should not have wrinkles, and the back of the bra strap should rest in the middle of your back, not hike up. Straps should not be loose or you will not get the proper support. Avoid demi's if you have full boobs and want good support.  "It helps to think of your bra like a seesaw,"  Susan Nethero of Intimacy Boutiques tells Redbook. "If the band is too loose and rides up in the back, the girls will sag. If it is level all the way around or lower, they'll be lifted."

Take care of your bras. Wash by hand or in cold water on the delicate cycle in a lingerie bag. And always air dry. Bras can last for two years if you take care of them well, according to Good Housekeeping. Still, don't expect your bra to stay the same over time. Like anything else, they tend to stretch. Nethero suggests buying a bra that fits best on the last hook so you can use tighter hooks as it loosens.

If all else fails, you can skip the whole thing. One recent study claims you'll stay perkier without any long-term support at all. Given the complicated process of finding that support, it's something to consider.

Topless Women in Public Not Breaking the Law, Says NYPD

Ladies of New York, you are free to walk bare-breasted through the city! New York City's 34,000 police officers have been instructed that, should they encounter a woman in public who is shirtless but obeying the law, they should not arrest her. This is a good step towards gender parity in public spaces.

This decision means that breast exposure is not considered public lewdness, indecent exposure, or disorderly conduct. It also notes that, should a crowd form around a topless woman, the officer should instruct the crowd to disperse and then respond appropriately if it does not. Relative coverage is no longer a factor.

This policy shift comes after several years of litigation and protest. In the 1992 case People v. Ramona Santorelli and Mary Lou Schloss, the New York Court of Appeals ruled in favor of two women who were arrested with five others for exposing their breasts in a Rochester park, holding the law void as discriminatory.  The ruling was put to the test in 2005, when Jill Coccaro bared her breasts on Delancey Street in New York, citing the 1992 decision, and was detained for twelve hours. She subsequently successfully sued the city for $29,000.

In 2007, Go Topless, a national organization supporting gender equality in shirtlessness laws, established Go Topless Day. Dozens of women protest – often topless – in thirty cities around the United States, promoting equal rights to be shirtless. Protests usually include chants of “Free your breasts.  Free your minds” and a song “Let ‘em Breathe” to the tune of the Beatles’ “Let it Be.”

While some who have witnessed these events have suggested that "[t]his is extreme liberalism and why America’s in decline” or “[i]t’s degrading to women,” others have been supportive. One man even said he would encourage his wife to join them.
Though bare-breasted women might shock the sensibilities of some in the public, it is encouraging to see the police responding positively to gender bias, even on such a seemingly small scale. After all, no one thinks twice about a man shirtless on a summer day. However, the female nipple or chest is still considered “lewd.” By reminding its officers of this, the NYPD is publicly declaring that it will no longer perpetuate unconstitutional gender discrimination, a standard to which all law enforcement should be held and a decision for which it should be applauded.

Posted by Unknown at 8:19 AM No comments: